How engine coolant has evolved over the years, and what modern coolant is the best for our classic British cars.
Written by Lee Orphan – 2010-06-02
How-To Library > Cooling and Heating Section 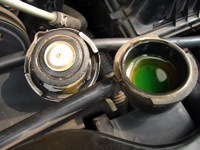 Once you have finally succumbed to the necessity to replace the coolant in your car, you now face a more daunting reality.

The general types of coolant used today by do it yourselfers fall into one of 3 main categories:

The Ethylene Glycol type of Inorganic Acid Technology (IAT) anti-freeze that became available in 1930's and remained the standard for many years began to be "muscled out" by Dex-Cool coolant (an OAT type of coolant) in GM products in the 90's. This new type of coolant used a totally different formulation than the old "green stuff", which was then followed by Ford and Chrysler using a hybrid organic acid technology based coolant as well (HOAT). Not to mention the Japanese and European cars going in their own respective, but similar directions.

As was mentioned earlier, the usual green or Ethylene Glycol Inorganic based coolant was the standard for American cars until the mid-1990's. The IAT type of anti-freeze had a typical service cycle of 2 years or 30,000 miles and contained silicates and phosphate corrosion inhibitors that protected cast-iron engines, bimetal (cast/aluminum) engines, and copper/brass radiators.

Hybrid Organic Acid Technology, or HOAT's, began to appear here in the States during the period of 2001-2003 in Chrysler, Ford, Mercedes, BMW, Volvo, and Mini Cooper cars. These types of coolants have a typical service live of 5 years or 150,000 miles as well, and are similar in general characteristics to OAT type anti-freeze.

Supporting Member to hide this ad & support a small business

As a result of retailers not wanting to carry a dozen varieties of coolant based on individual manufacturers needs, coolant suppliers have developed universal coolants formulated on OAT based products, which they say can be used safely in all makes and models. The jury is still out on this claim, and has been challenged by the Better Business Bureau at some levels.

What is the bottom line for older cars using copper/brass radiators such as our British cars? All of the articles and coolant manufacturers reviewed suggest following the manufacturer's requirements. Great. In looking at Bentley's Workshop book, it refers the home mechanic to use "anti-freeze solutions of the ethylene glycol type incorporating the correct type of corrosion inhibitor" while the 1980 owners manual further refers the home mechanic to use anti-freeze "which conforms S.A.E. J1034 or BS 3151/2 (Unipart Universal Antifreeze). Unfortunately, I can't remember the last time I saw a Unipart anti-freeze container.

My research has found at least one product that appears to be satisfactory for our cars. Zerex Original Formula Anti-Freeze looks like an excellent candidate. It is IAT based and actually refers to the SAE J1034 standard mentioned in the 1980 MGB owner's manual. You can review the product technical bulletin online on Valvoline's website (download the product information PDF for the details). It is available full strength or 50/50 premix in one gallon containers for the do it yourselfer.

In summary, based on the articles and websites reviewed, use IAT formulated "green" anti-freeze if you can find it for your British car.

Second best would be the universal variety of anti-freeze, remembering to change your fluids more frequently than the 5 year or 150,000 mile cycle.

— Modern Automotive Coolants —
Written by Lee Orphan – Created 2010-06-02 Published 2010-06-02
Contents © Copyrighted and published under the following terms:
Released under the terms of the CC Attribution-NonCommercial-ShareAlike 2.5 License

Did you find this article helpful? Rate it or ask a question below!

Leave a rating or a comment below, and get instant reply notification via email
If you have a long question, or a question not directly related to this article, please start a new topic in the Discussion Forums

Click any icon to bookmark this page with your choice of services. Hover the mouse to see where a link goes.
Don't see your favourite service? Contact the webmaster with details.